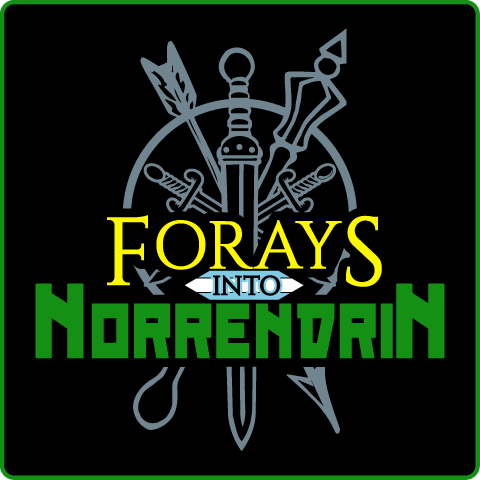 In the mountain pass where travelers vanish, a stone staircase leads downward...

Forays into Norrendrin is a traditional roguelike game, with a focus on a streamlined experience and tactical combat that requires difficult choices. You have found yourself in a deep dungeon, filled with monsters and treasure, and you seek to travel to the bottom for reasons unknown. You are prepared for your expedition, or at least you think you are, but if you perish in the deep, there's no coming back -- someone new will have to travel down next time. The dungeon is different every time you play, and who you fight and what you find may be very different from foray to foray.

You don't know who you're dealing with!

Though your reason for traveling through Norrendrin's deep is unknown, you aren't a clueless wanderer who fell into this place by chance. The Hero of Forays into Norrendrin is a skilled, versatile warrior who can learn many tricks on his descent to the depths. You improve your character primarily by finding Shrines in the dungeon, like a Shrine of Magic or Shrine of Stealth, and activating them to improve the associated aspect. Shrines sometimes grant valuable Feats, so it's vital to find as many of them as possible! Magical items are also present in the depths, but you will do most of your fighting with what you came with -- five weapons and three kinds of armor. Each weapon has a unique effect that can change how you decide to use it, like the Mace knocking foes backwards occasionally or the Dagger always hitting while in darkness. Each kind of armor affects your Defense and Stealth, with one improving at the expense of the other; for example, Plate armor is the heaviest and provides excellent Defense, but is tiring to wear and reduces Stealth with its loud clanking. As you travel through the deep, you will learn to manage your torch, which will provide a chance to notice traps when it's lit, or a chance to sneak past or surprise enemies when it's not.

What manner of fiend is this?

Enemies in Forays are highly varied, and many require a strategy to defeat effectively. So as to not spoil too much, let's just say there are immobile creatures you don't want to stand next to, creatures that react to light and shadow, creatures that burst with magical vengeance upon dying, creatures that can create illusions to distract and disorient you, and also fantastic humanoids with more organization than mere beasts. Many creatures have unusual attacks that can freeze you in place, ignite you, coat you in oil, hit from a distance, or a wide variety of other tricks.

The enemies in Norrendrin are not always the greatest threat to your well-being. Traps can be especially nasty if you're already hurt or fighting some foe, but even a pool of water can be somewhat troublesome if someone uses a freezing attack on you while you're wading. Many types of terrain exist here, and most interact in intuitive ways with existing effects. Because each time you play, the dungeon and its inhabitants are different, you can expect to find many of the interactions through trial and error.

You can play Forays into Norrendrin today! Download the .zip here. After you extract the files, running should be simple on Windows -- double-click Forays.exe for the version with a resizable window and mouse support, or ConsoleForays.exe for the older text-only mode. On Mac and Linux, you will need Mono installed (some distros of Linux already have it installed) and it may be runnable with a double-click or may require a command at the terminal: mono Forays.exe or mono ConsoleForays.exe run from the directory you unzipped to.

How many of you are there?

Forays into Norrendrin is primarily developed by Derrick S. Creamer, with a bit of help from friends (this website was developed by @tommyettinger , AKA notostraca). The game is under active development, but goes on hiatus sometimes so Derrick can work on other projects like the annual 7-Day Roguelike Challenge. Both developers and players hang out on IRC in the #forays channel on QuakeNet; if you don't have an IRC client already, you can use the webchat here.